Well hey hey people! How have you been?

I've been awfully absent but I'm still here, sewing away. I'm currently in between projects and waiting for a decent day to take photos of my new makes as well as cutting out scrap pieces for a quilt and pondering what to make next. Its terribly cold now that winter has come so all I really want to sew is cozy warm things. The Astoria jumper from Seamwork patterns is currently waiting for its fabric friend to arrive so I can whip it up and be all cozy and stylish for work!

Anyway, I have something rather exciting for you to see - a new dress!

Oh yes, yes, yes. I have a BIG backlog of things to post so let just get to it then shall we? 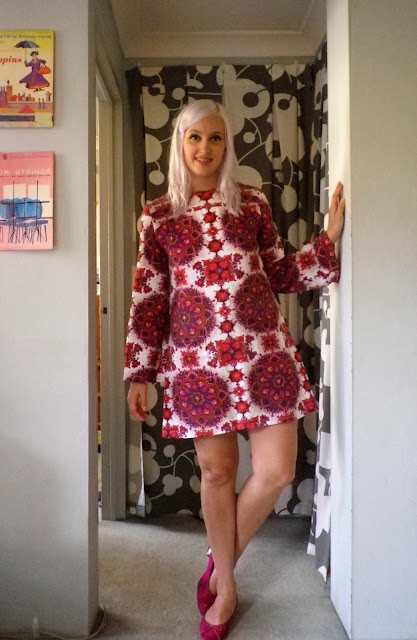 Success in the form of cardigans and recipe cards

Hello hello! What did you get up to today?

Today was my first opp-shopping trip in awhile and I must say, probably the best ones I've had in years in terms of finding exactly what I wanted. Which if you go opp-shopping you will know that you can't really go in with a list of things to buy - but instead let the shop sell it's items to you whether you thought you needed them or not.

I actually had decided well before getting out of bed this morning that I would really like to get a lumpy cardigan and perhaps a pair of high-waist "Mum" jeans that I could turn into a skirt.

Well, I managed to get those, plus a few more items which I had looked around the internet and other opp shops for, but never found.

It's getting better all the time

How was your weekend?

Thank you for all your comments on my previous post. I'll reply to them all shortly as I think they all need a properly written response as you all took the time to write such nice things.

I think sometimes I just get myself worked up and need a little breathing space and time for things I enjoy! Everyone goes through periods of good times and down times and it's important for our mental health to try to get ourselves out of the funk we've buried ourselves in.
I've been really good and working away at the tweed pinafore. The fabric is really lovely to sew with - no special needles required. And so far I've gone through 3 packets of bias trim for all the Hong Kong seams!

I haven't woke up early enough on a Saturday in awhile to be able to go to the opp shop, which closes at 12. (Yes I sometimes sleep till 12, what of it?)

But today I had to go to the post office (which also closes at 12) so I on my way back I popped into the ole' reliable opp shop for some goodies!

Sometimes I read all those clever crafty blogs and wonder where they come up with all their DIY ideas, I think they get them from books like this... 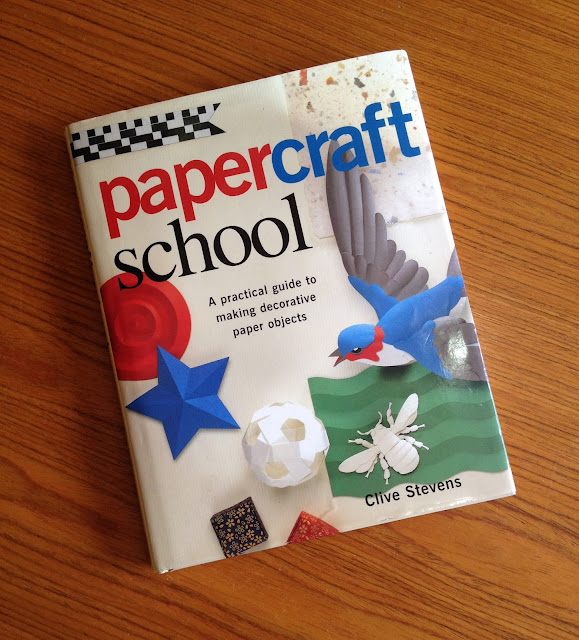 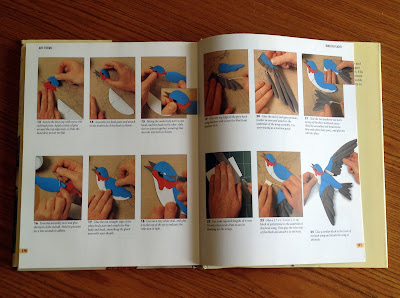 How awesome is that 3D bird? There's lots of other nice ideas in there! 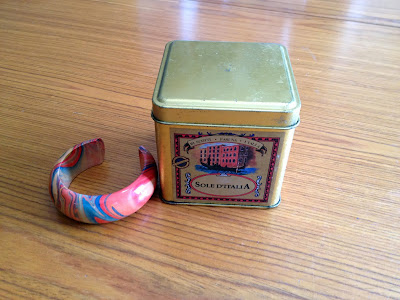 This swirl painted bangle and a neat little tin. I love to collect tins and other box-type things. 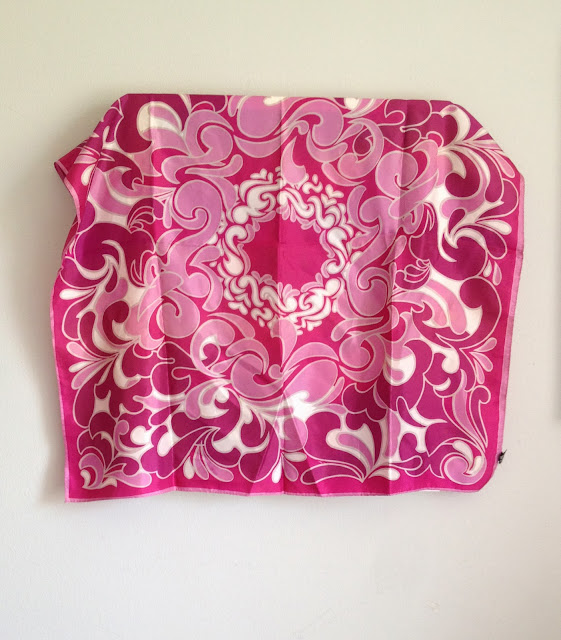 When I spotted this scarf I thought it was a new-ish reproduction from a chain store, but the label says Rayon and made in Japan, to me that says 70s, so yay!

This opp shop I go to, isn't often that forthcoming with fab clothes, but I took a quick peek at the jacket rack and found this 80s Liz Claiborne wool boucle blazer. And in my size! Awesome! 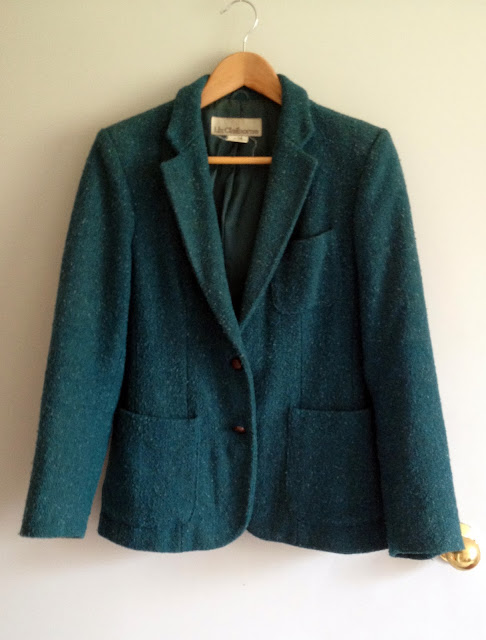 I also took my chance at the fabric box and pulled out almost all the contents until I found this purple stretch velvet. There's only about 1/2 a meter there so I might get a flippy miniskirt out of it if I'm lucky 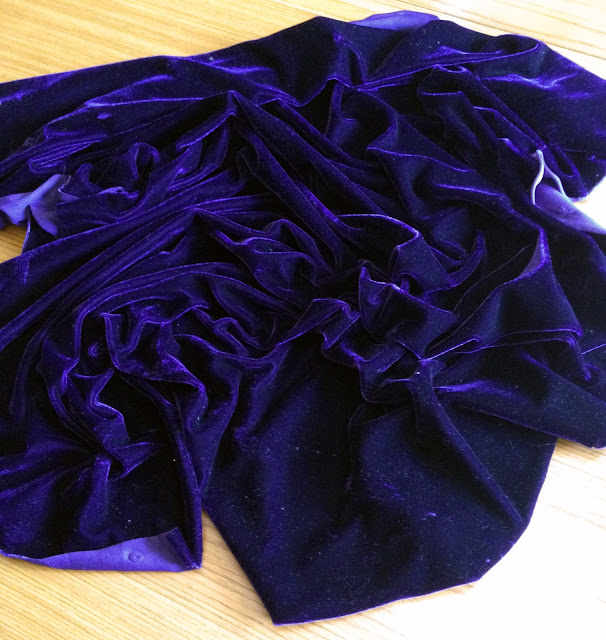 In that same box I found a half finished blouse. It's almost finished so why not get it right? And then in the craft box I found a zip-loc bag with with some of the other parts of the top! 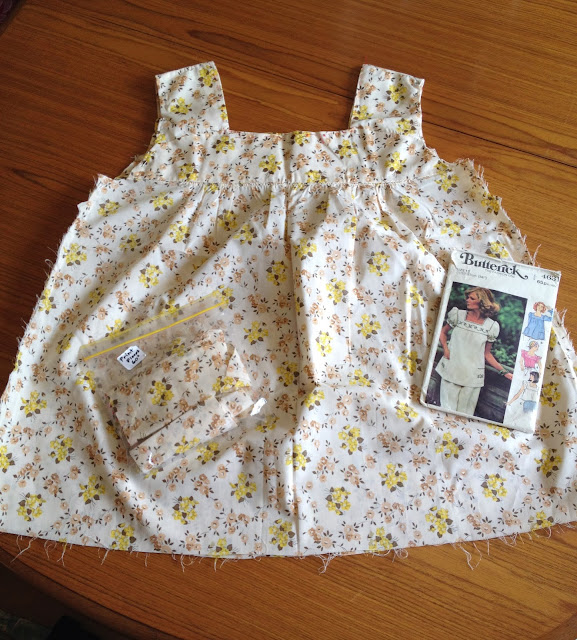 And then to cap it off, I found the actual pattern (Butterick 4631) in the patterns box! All 3 parts separated and now brought back together. Yay! 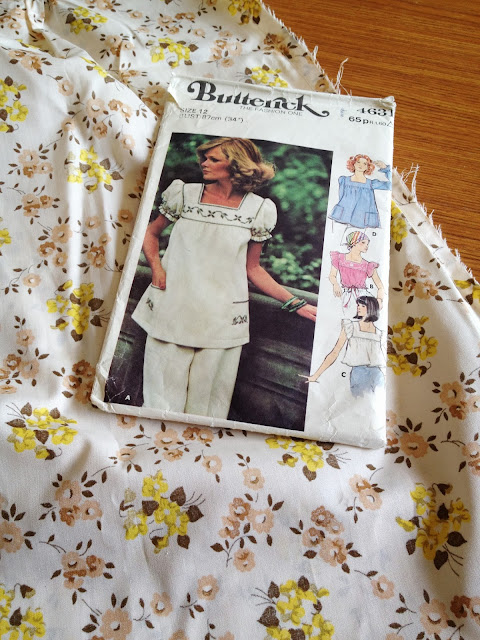 And last but not least, in the record crate which is normally full of musicals and classical stuff, I found this record

I didn't actually know who Buffy Sainte Marie is, but she looked a little like Vix from Vintage Vixen and I liked her dress so into my shopping basket she went. 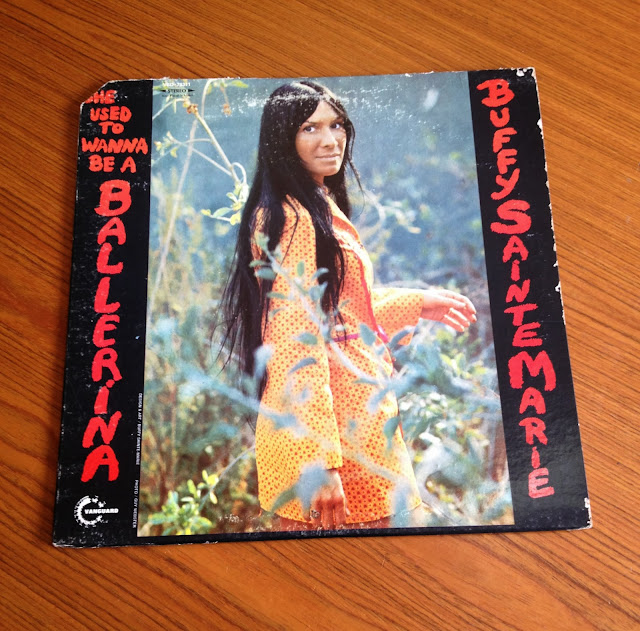 Turns out Buffy Sainte Marie is a well known Canadian First Nations singer/songwriter. She wrote 'Universal Soldier' which became a hit for Donovan and had many other songs covered by other well known singers and spent her formative years in the Greenwich Village alongside other Canadian musicians Leonard Cohen and Joni Mitchel


I'm not sure which one was the best score today - the record or the half-finished top!

Are you planning on visiting your local oppy this weekend?

Opp Shopping on a cloud

I often forget to post photos of my opp shopping and by the time I remember, the time has passed and its pointless, but I remembered today, so would you like to see my goodies?

After going to the dentist for a filling (boo!) I decided I deserved a present. Shopping while coming off anesthetic can be funny. I kept touching my numb face like some kind of weirdo, and finding silly little things that I would stare at for a bit before realising that its just crap and I would never buy that on a normal day.

What I did manage to find with my head in the clouds were these... 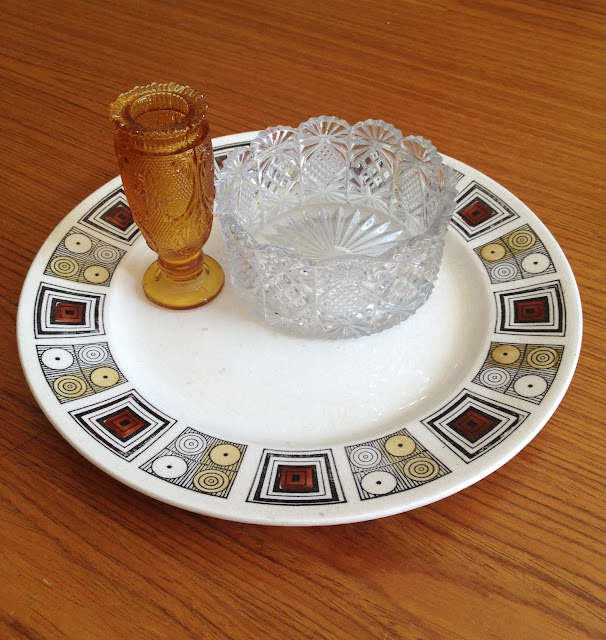 In my garden I have a few plants already budding waiting for spring, but they never get very big so this little bud vase will fit them nicely. Lucy's recent post on her dresser table featured little glass bowls as jewellery/ make up storage and I spotted this little bowl which I think will handy for my rings and such

The single (sigh) dinner plate is important to me. As a minor ceramics fan I saw the name on this and knew straight away that I should buy it. The design is by Kathie Winkle who did work for Broadstone ceramics in the 60s and 70s. I also have a ceramic jar by from Kathie Winkle which currently stores my marigold seeds.
You can read more about Broadhurst here 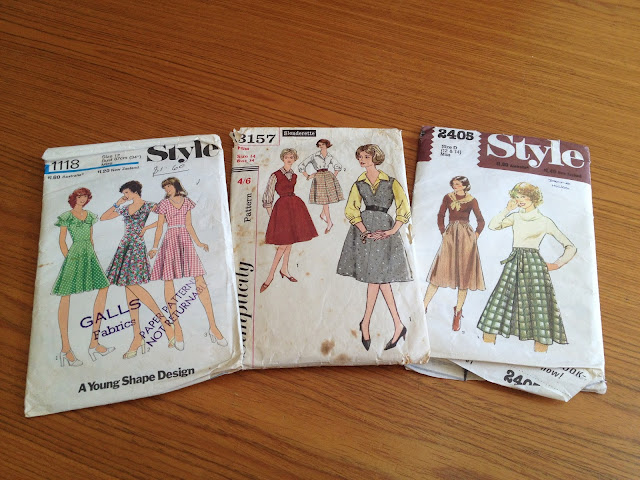 I don't often have much luck with patterns at opp shops - they're usually 80s to 90s patterns which are never all that attractive. These 3 lovely ladies were waiting for me patiently today.
Misses dress Style 1118 (1975), Jumper and shirt Simplicity 3157 (no year, I'd say early 60's) and Skirt Style 2405 (1978)
Style 1118 is particularly handy as I have been looking for a slim fit bodice dress like this for awhile 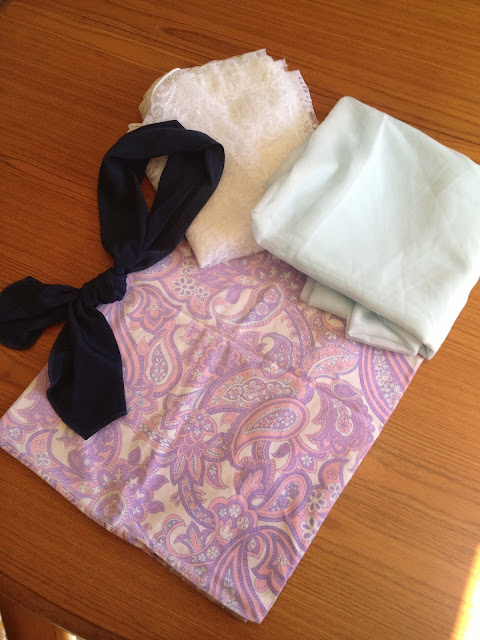 The below piece is a huge table cloth that I am considering turning into a dress. The fabric has a big design in the middle, which spreads out over the table cloth. I kinda hate it when people chop up vintage sheet sets to make clothing and leave the pillow cases as orphans (like the one above) so I'm a little unsure if I should chop up the table cloth - but I don't imagine using it for anything else and it doesn't come with matching place mats or anything.
Do you often have silly dilemmas like this as a sewer? 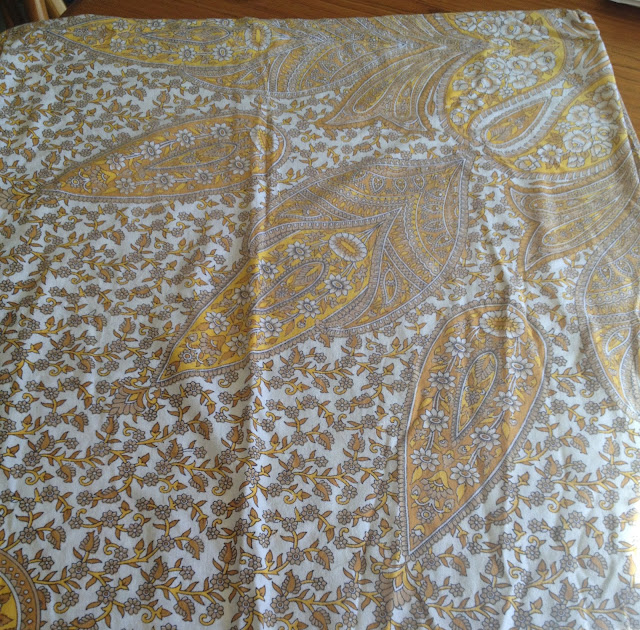 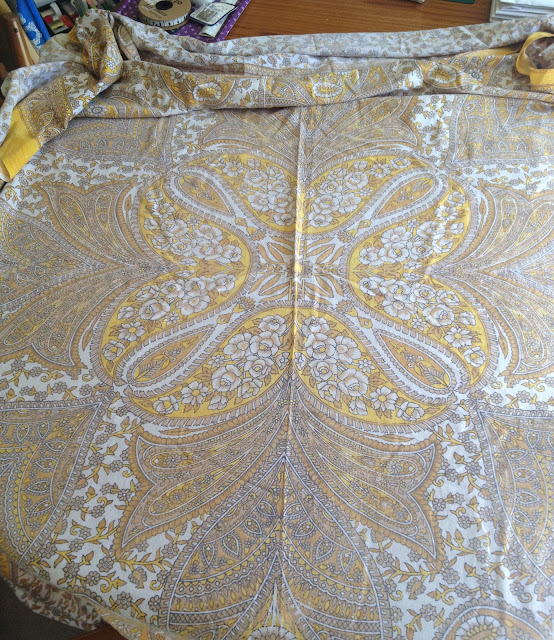 Pretty ok hoard for today. I didn't want to hang around digging for too long as I had to go pick up my repaired sewing machine.


I hope your weekend is going well so far! And remember - shop carefully while coming off anesthetic!