Hello to you all!

How have you been? Its been a while, but we have no one to thank for that except but my naughty little modem who decided to conk out last week leaving me internet-less until yesterday!

I have been sewing quite a few little projects in the mean time, but I can now finally share with you the blouse and pinafore outfit that I have dubbed Peggy, in honour of the return of Mad Men for the year!

Once I had finished and popped on this outfit, it felt like something the smart and career minded Peggy would wear. I just missed the deadline for the Mad Men sew along so I never got to submit it, but I guess sometimes my whole blog is just one big Mad Men sew along anyway!

And so I present to you now for your perusal - the Peggy Pinny! 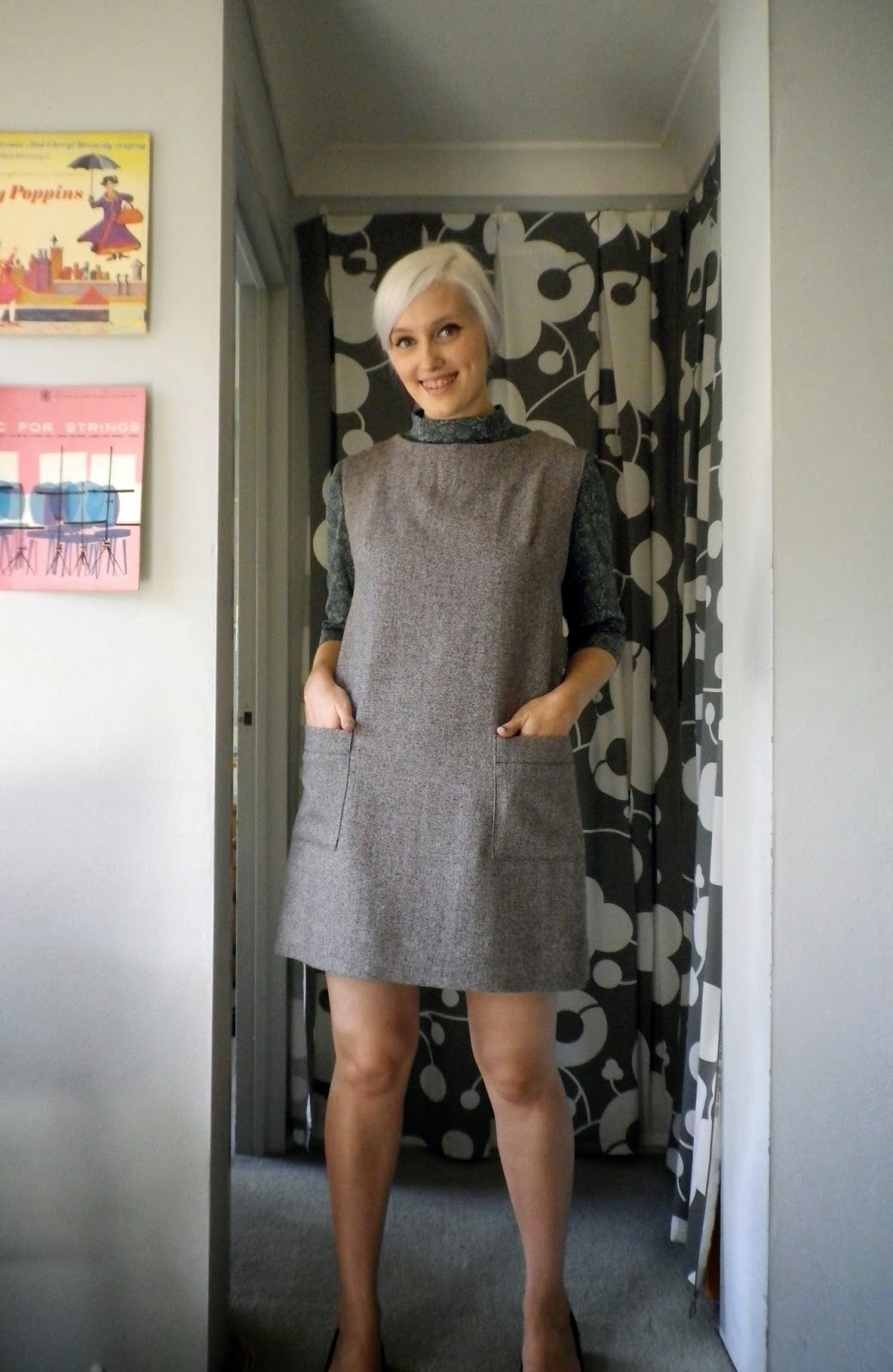 The pattern used for this lovely lady was Simplicity 5028 from 1964 or 65. I fell in love with her when I saw that adorable button closure on the back - such a cute little way to close the dress, and there is enough fabric wrapped around you that there is no fear of accidentally flashing your fellow commuters on the train 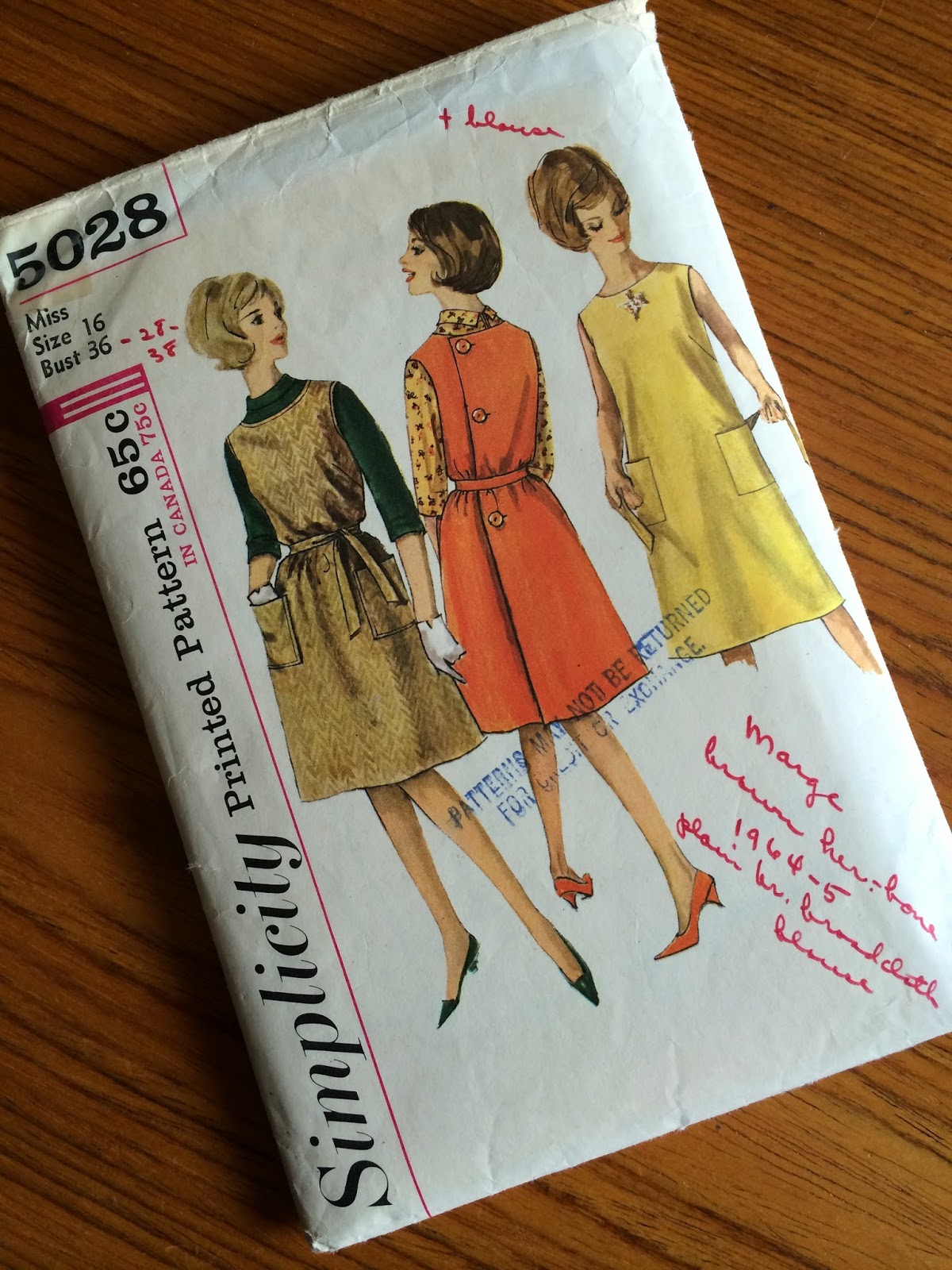 The fabrics used were a combination of new and vintage - the blouse was made with a light cotton in a paisley print - which when I received it in the post, was rather stinky!

After an airing out, accidental colour running, a rinse and a wash it was totally fine! The seller had stated that it actually was an 80s fabric - I guess one of the 80s does 60s sort of things. I can sort of see that it might be 80s, but the pattern and colour could easily pass as an original 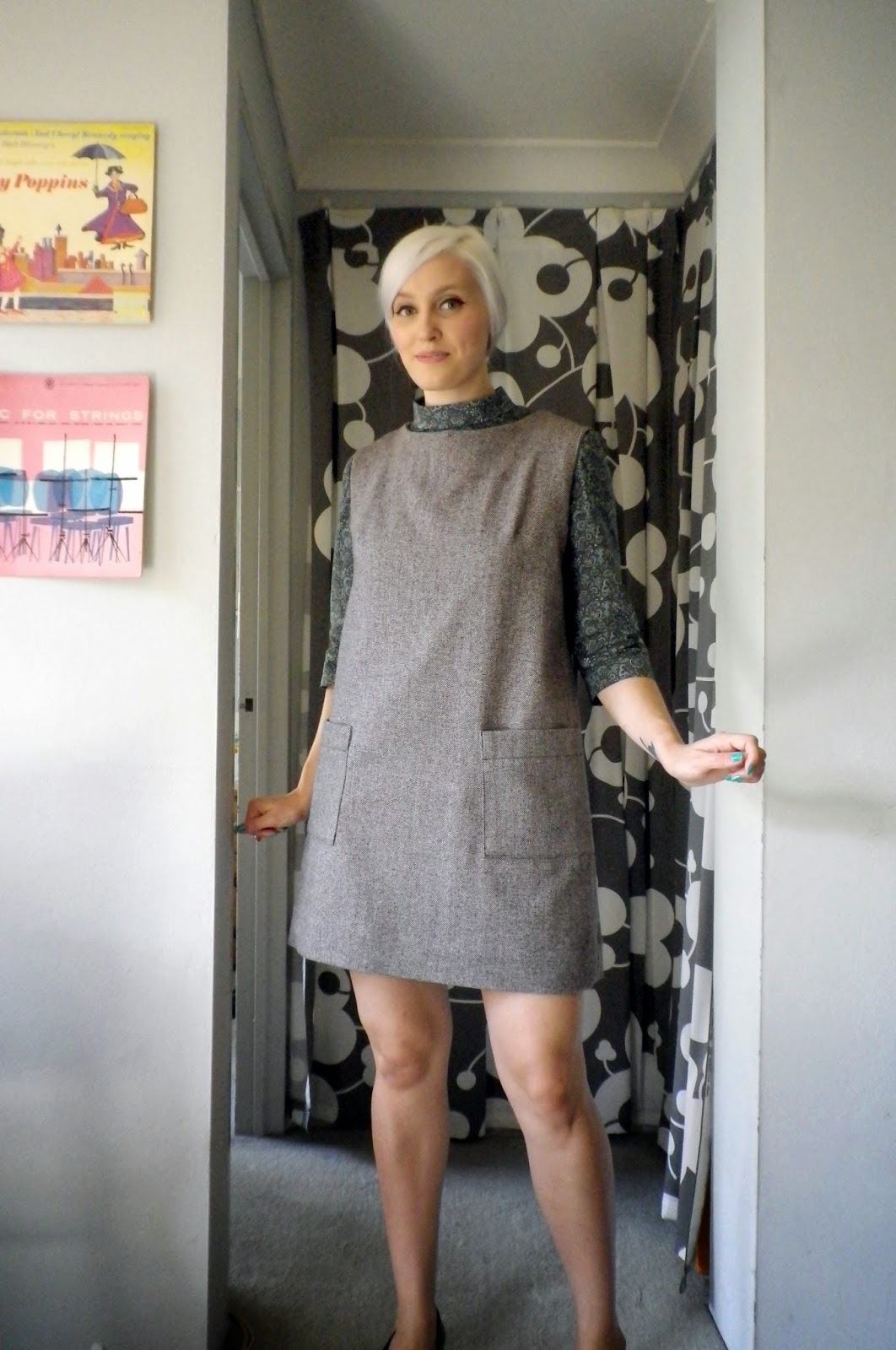 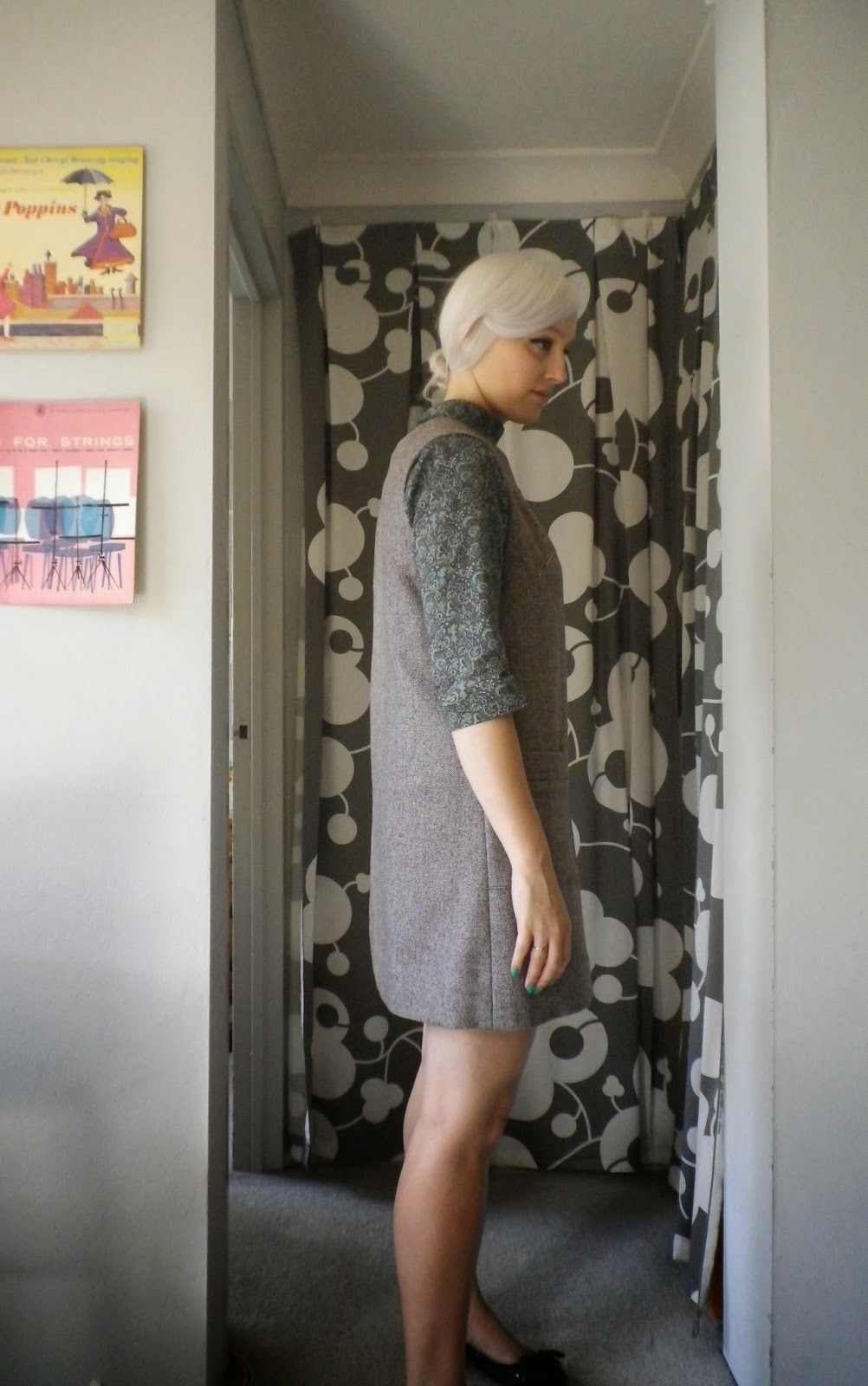 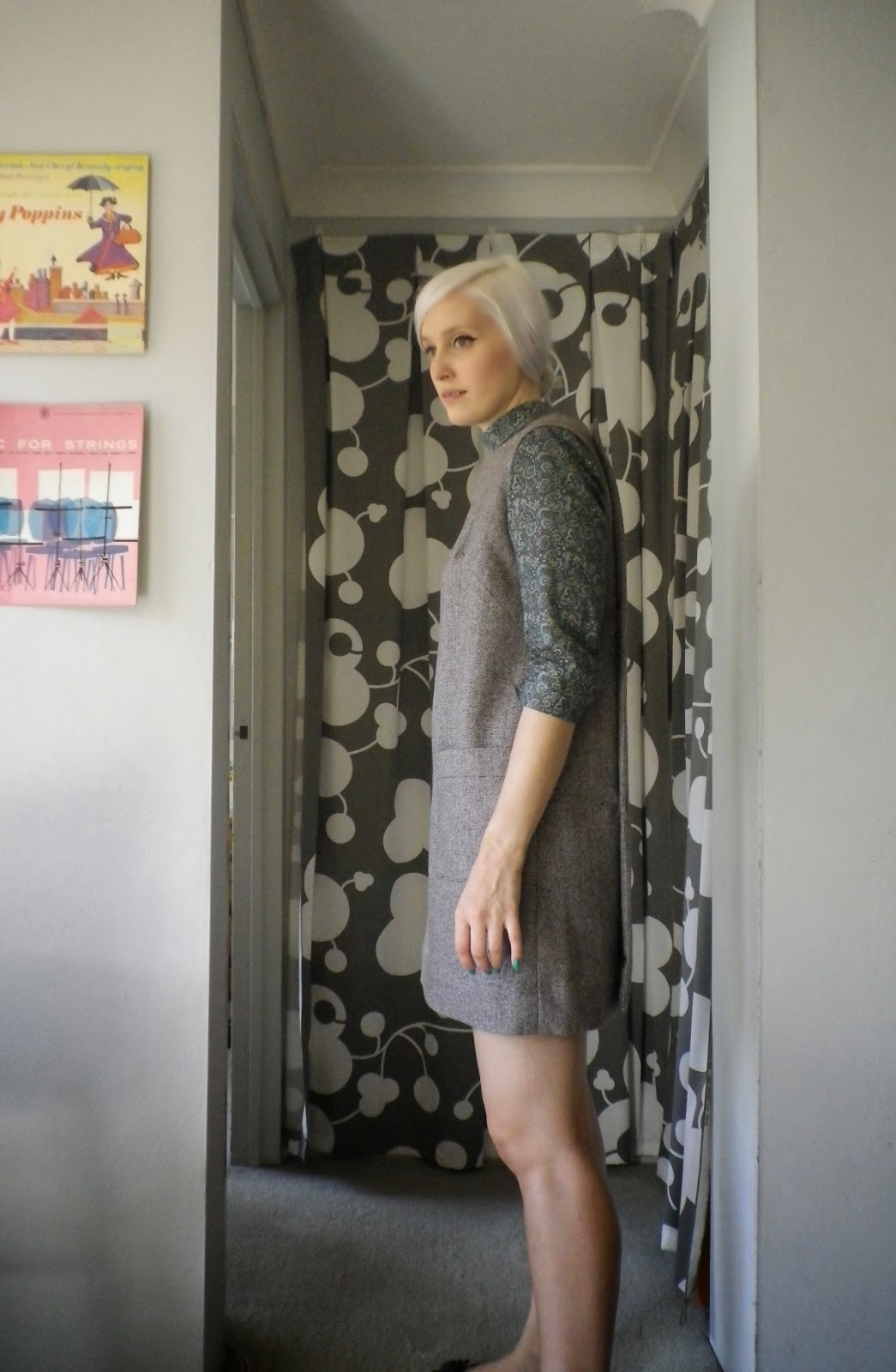 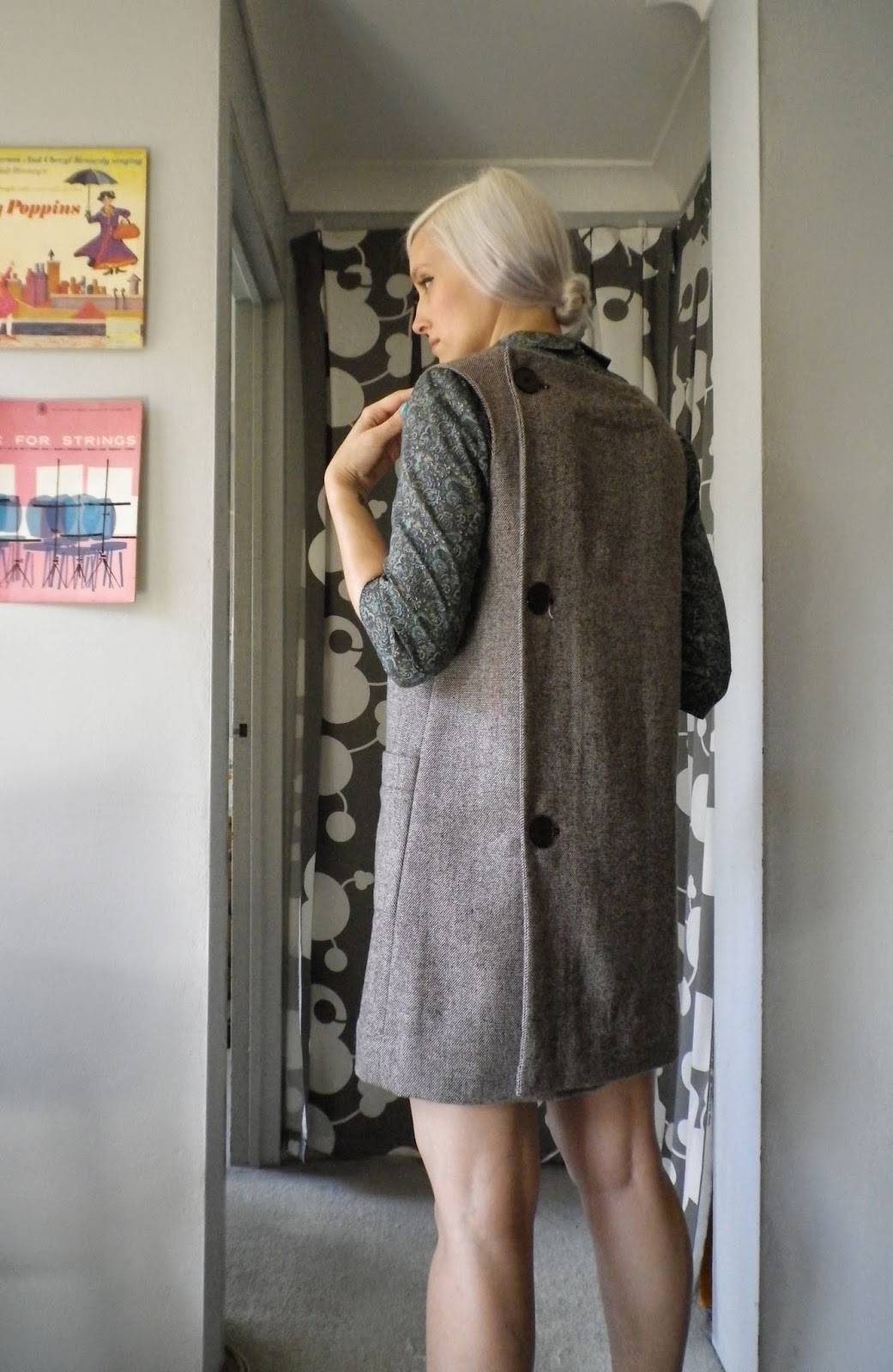 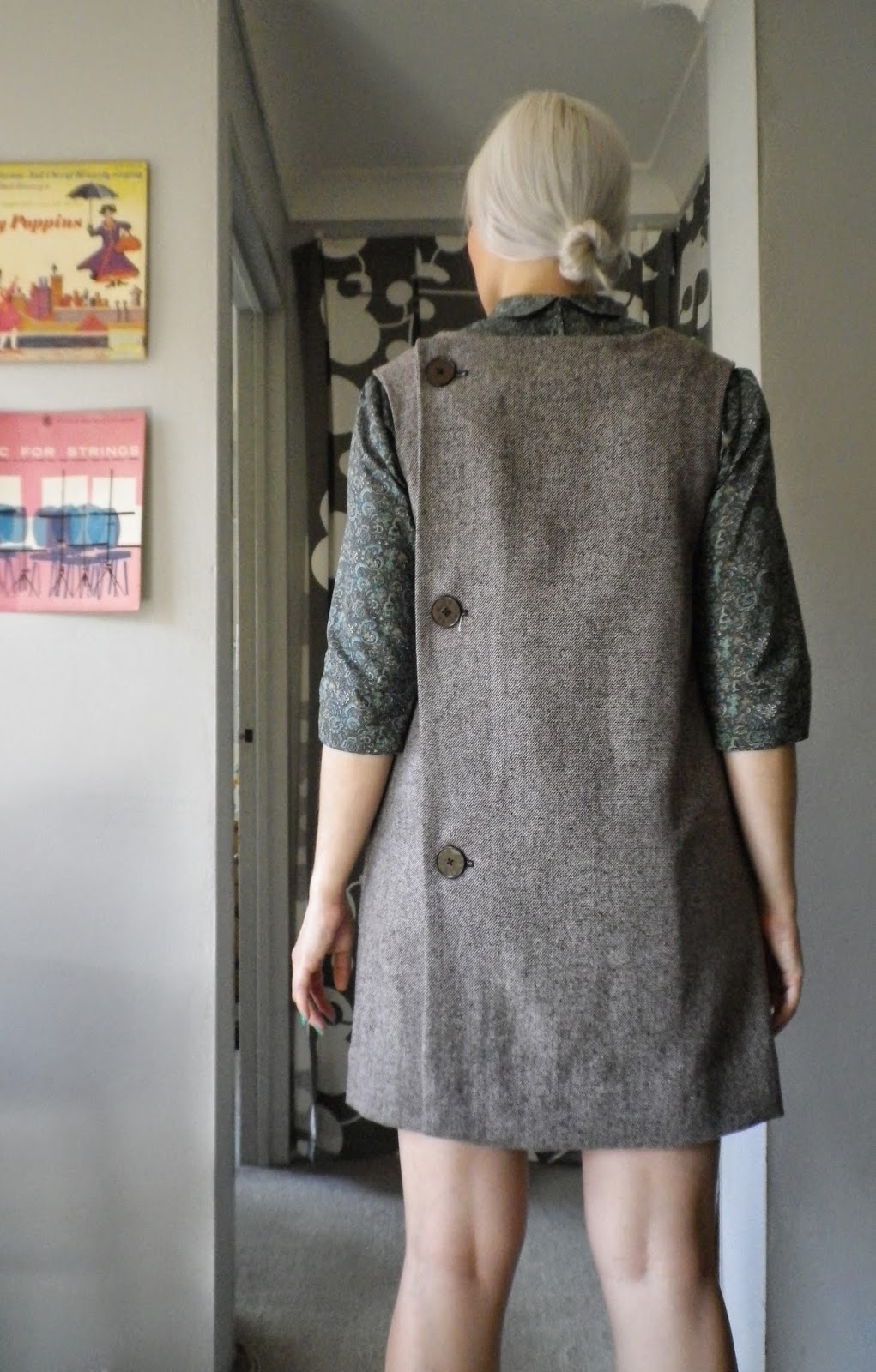 The tweed fabric I purchased from Fabric.com* and was so easy and nice to sew with. I was worried that I was going to break a few needles sewing with it, but it worked out well

(*The tweed is no longer available sadly!) 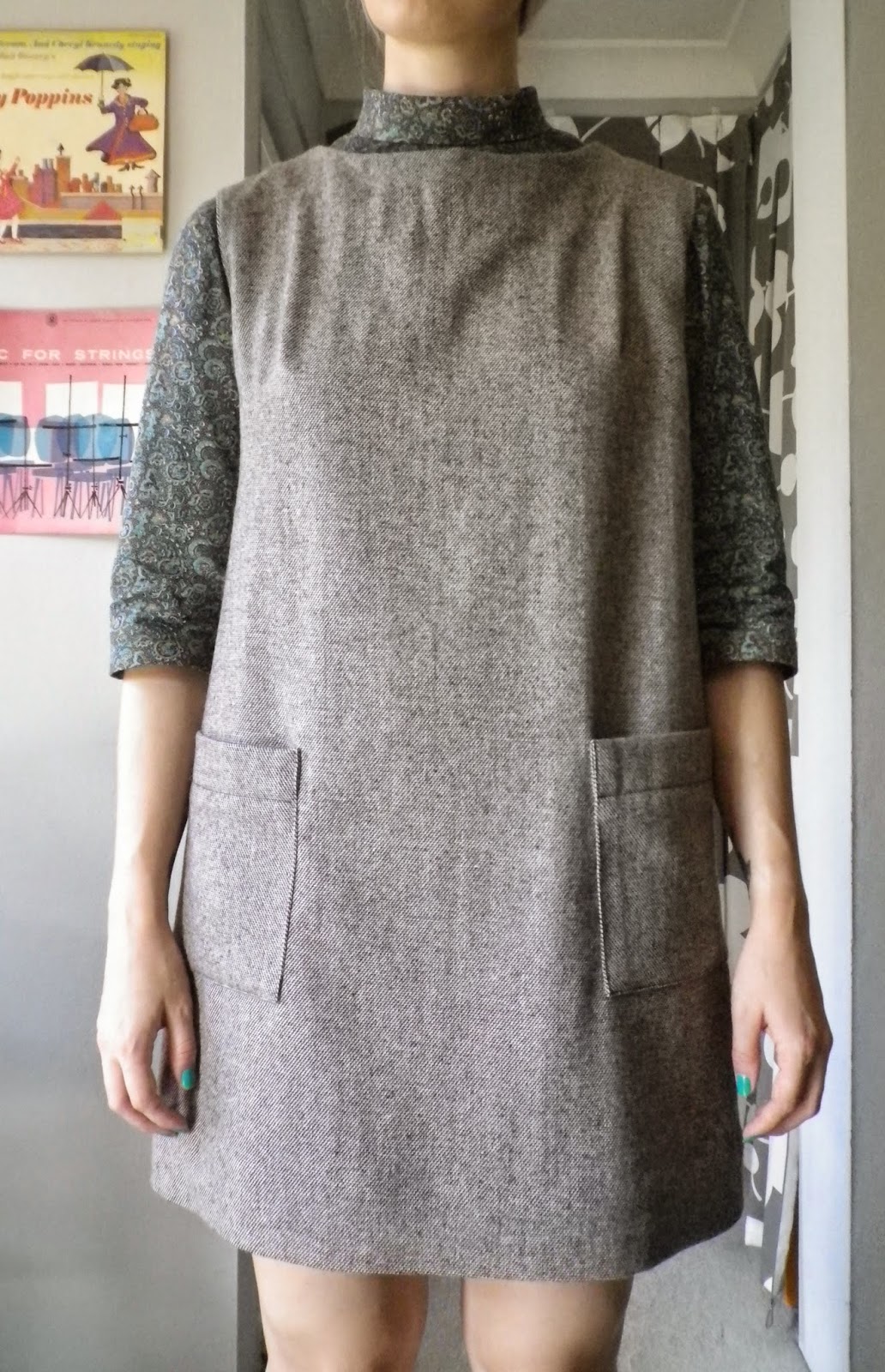 Its a rather comfy fabric, nice a warm! Though I did get caught out yesterday on the first legitimately cold day of Autumn (for me) and I thought I would have been warm enough in just this outfit. But no - I will still need coats and tights while wearing this! 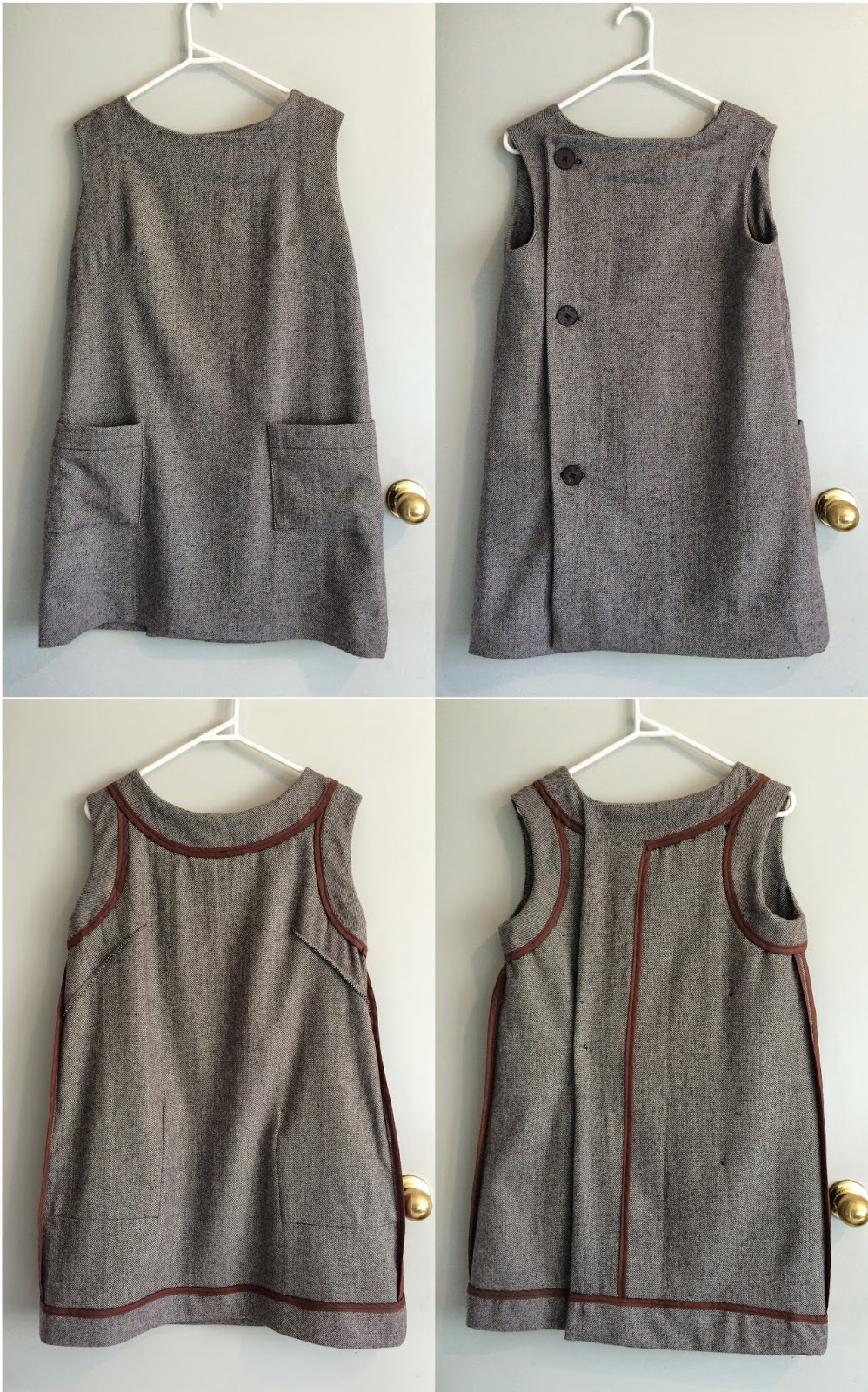 I also decided to try some fancy bound seams or Hong Kong seams, to dress up the insides and stop the wool fibres from dropping all over the place.

Hong Kong seams are simply bias tape bound edges. I know I used black thread on brown fabric, but meh! I didn't have time to get to the fabric store and buy matching thread! 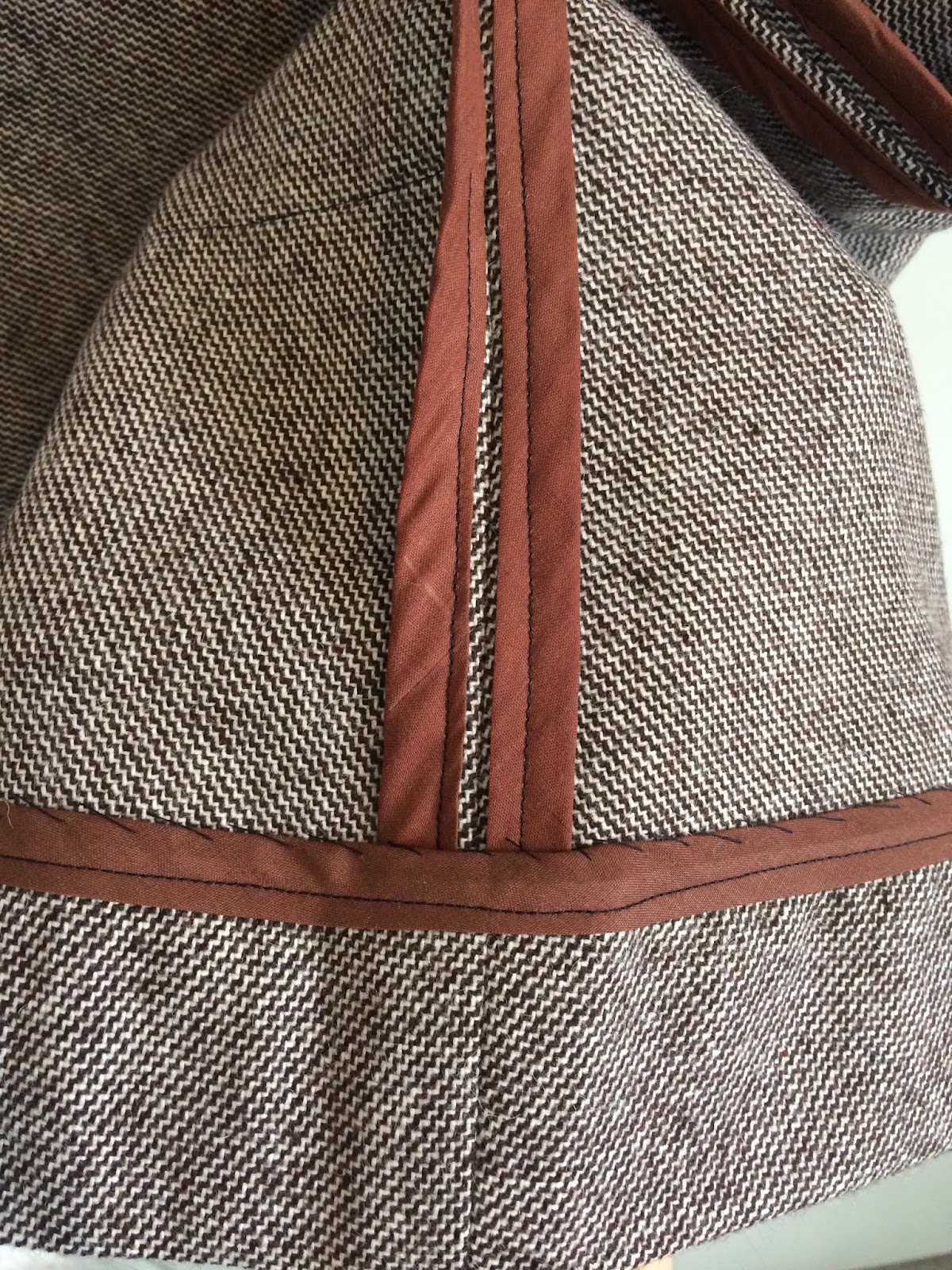 I don't have a photo of the inside of the blouse cause its really very boring actually! Just pinked edges as the pattern instructions suggested to do so! I might have to do that more often in the future because its so much easier then overcasting them. 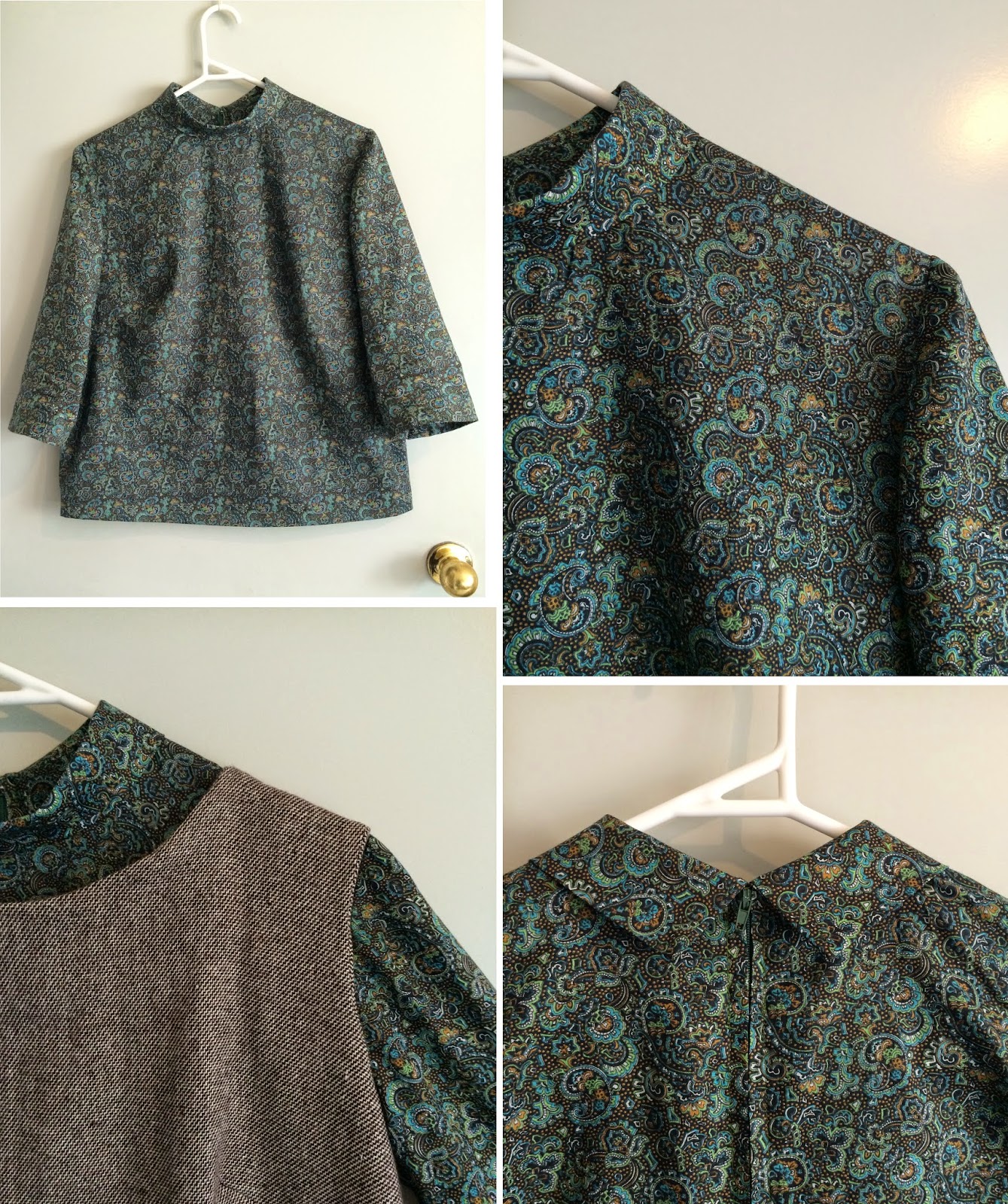 I've also worn the blouse as a separate and it definitely has a sassy house wife feel to it. Like I should be dancing around the kitchen, mop in hand and The Ronettes on the radio and a cake in the oven!

I'm pretty proud of this girl, and she was very easy to make. The most time I spent was binding all the edges and then slip stitching the facings down. Totally optional as I could have used a different fabric and not have had to do that, but sometimes its all in the details!

I did also make the belt, but I think I actually prefer it untied. Adding the belt seems to bulk up the top half of the pinny, and shorten it somewhat, so I may have to wear it with tights when I do that.

The blouse is also very easy to make and I can see myself whipping up these as easily as I make a skirt. I do need more blouses in my wardrobe so there's no reason for me not to do so! 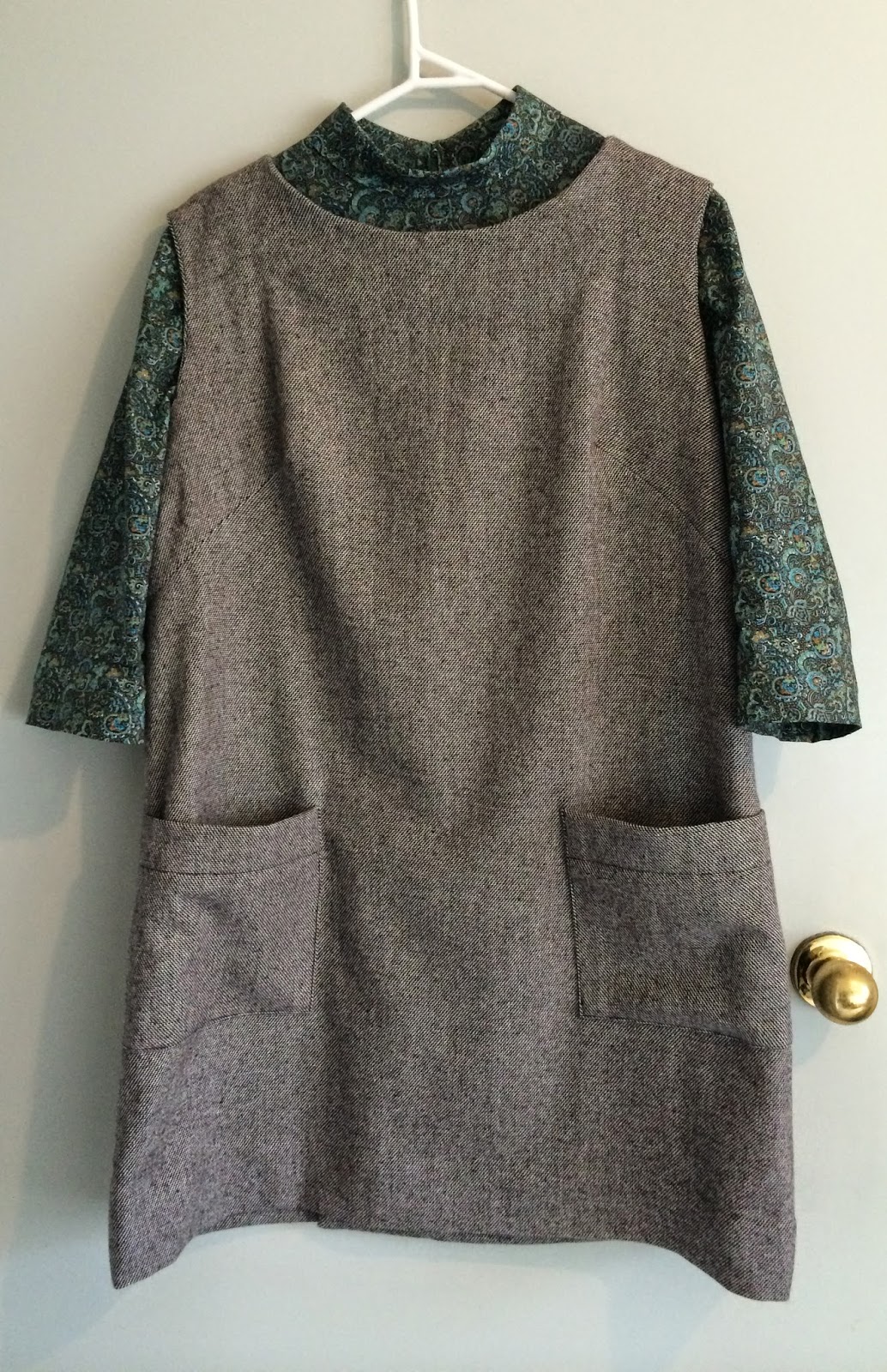 I love that both of these garments are wearable separately. I think I've been able to boost my wardrobes flexibility quite a bit as I can pair them with a number of items. I think that it's the perfect motivation for sewing more separates and also attempting a wardrobe maker type pattern by making a number of garments in the same style

A perfect start to my autumn sewing projects! And a timely addition for Me Made May!

What have you been up to this past week? I must make my rounds to all of you who I know have written posts on your blogs and so on.

And now for another project! There's a lovely extra long weekend coming up so hopefully I might have something more to show you soon!

Take care pretties!
Cat xo
Posted by Catherine at 5:47 AM